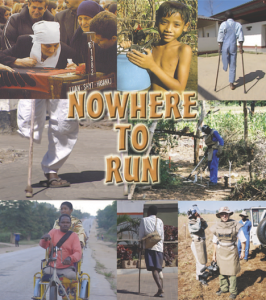 "Nowhere To Run" is a 45 minute documentary film about how landmines have become a serious global crisis and the key role Canada plays in the fight against this destructive weapon of war. The documentary was filmed in Mozambique, Bosnia and Cambodia and shows how Canadian and international organizations are attempting to restore the lives of people affected in these three countries. In this time of increased terrorism and heightened security, landmines still remain one of the cruellest forms of terrorism. This lethal weapon kills indiscriminately – a child is as good as a soldier. Many of the victims are innocent children who are oblivious to the dangers that lay hidden in the ground. It is estimated that there are between 80 to 100 million landmines hidden in the ground around the world. Roughly 3 people every hour, 71 per day, are injured or killed by landmines. The film was produced by Anthony Sherwood Productions.